the stories are sometimes unbelievable, but kids are resilient, they can do with a little bit of help amazing things. so sometimes we were all surprised it was so soddenly, you can never know which is the last straw that mad the change, but from those stories, they give us the energy we need for the next few months, so here are a few of them,

Rachel, was always alone, she did not have any friends. When the teacher did ask a question she never answered, she was really broken down, she had the lowest scores of the class, she didn’t care, when her mom asked her with tears in her eye, why? She told her mom with a passive tone, she doesn’t have a reason to do it.

our director did diagnose her, with cognitive deficiency. It started like that but it was developed much worse, Rachel doesn’t think she is worthless, she is really less then everyone around her, and everyone knows it, so there was no reason for her at all to try to do anything. she did give up before the battle even started, the reason for getting worse was much more in her believe, then it is actually happening, so even a little bit of  bullying, does the trick, and she was finished for life. she didn’t give any effort for friendship, so everyone that tries to speak with her once, she didn’t even properly introduce herself, she looked like a shadow, she didn’t know it is much more her doing than a illness,

We took in Rachel; we gave her somebody to be her sister, a new older sister, in place of no one. Someone to be with her, we made her the captain of the craft team, and everybody needed to ask her for advice. and it was wonders she changed in those two weeks, no one could believe it is the same girl.

she started to laugh, she had loads of new friends, she even redo a test from the last term, and everyone did see she really does have talent’s. Rachel was a new person.

and Rachel is not first case and not the last case, and not the worst case, after 2 weeks the director did receive a big bunch of flowers with a box of chocolate as a thank you from her mother, but the director said the most rewording thing wasn’t the chocolate or the flowers, it was the tears of joy that came out of the mothers eyes.

everything was arranged for the wedding in Manchester, we were waiting the whole summer for it, so one morning I told Miri with excitement to pack we are going to Manchester, suddenly! Miri started crying, i was in shook, I didn’t know what did I do wrong, I waited till she could speak, and asked her, did I do something wrong? no. answered Miri still crying, no! but I made friends in camp knak I want to join them, and I do want to be at the sister day, where everyone gets a new sister,  I can truly say I didn’t fully understand at the moment, is that really more important than a wedding with all of the siblings and food, but it looks like she found somehow a another place she feels home, I am not jealous, I am happy for her, she needs it, its truly wonderful. 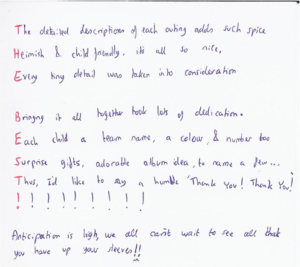 one of the thousand letters we received 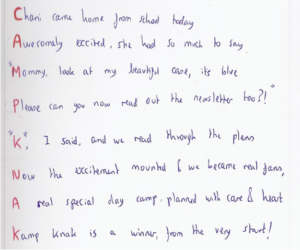 anouther exemple of a happy ending

yes I was left without my dear mother, but I found here a new pair of ears. only with your help I can move forward!

wow! wow! wow! I cannot even began to imagine the thousands of tiny details that have gone into all this! outings activities simple unbelievable!

just tears, nothing more! I really cant express my gratitude, for changing my daughter she is now a totally different person, this was the first time she laughed!! then I found a tear on my cheek, you didn’t know my daughter before, I did thank you

everything was so great, but I was a little bit upset about camp, my daughter told she doesn’t want to go anywhere, she wants to go only to camp knak.

A lot of the time, it can be hard to know where to go to get help for problems affecting young people. That’s what makes future forward such a wonderful charity. They can offer help in a way no other can. wide range of projects and they are very, very good, in what they are doing. I’m so pleased to be part of it by leaving a gift in my will

I know that the gift in my will can help to make sure the next generation of young people will have someone who’s there for them, just I had. I also know that even after I’m gone, I’ll still be supporting one of my favourite charities.

a smile for a child